How Users Have Embraced (Or Not) 280 Character Tweets

In November last year, Twitter doubled the limit on tweet length from 140 characters to 280 characters.  Because Affinity Answers observes and analyzes consumer behavior across social networks including Twitter (more on how we do it here), we were prepared to observe lengthier Tweets from brands and celebrities as well as lengthier replies to those Tweets.

Sentiment analysis differs when you analyze short messages (such as SMS and Tweets of 140 characters) as opposed to lengthier ones (like Facebook comments or blog comments). What did we observe from this data?

The above chart says that there has been almost no change in the length of Tweets since the character count doubled. What does it look like when we split them across different categories? 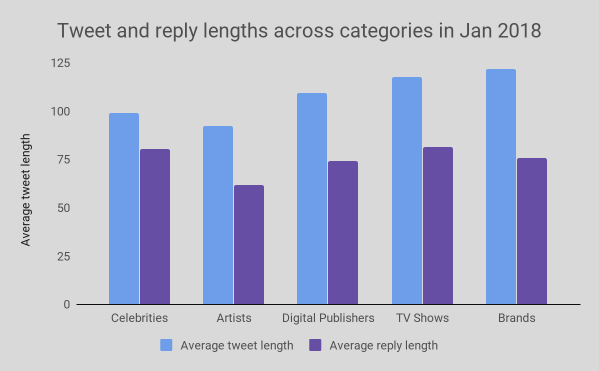 Some of our hypothesis’ that brands and publishers would Tweet longer texts and that fans of celebrities and TV shows would respond (reply) to the Tweets with lengthier texts was proven false. However, we observed something else of interest – engagement with Twitter increased. 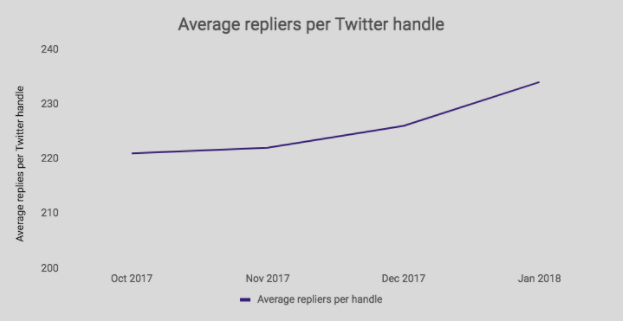 We were a bit bewildered with this observation, which shows increased user engagement while the length of the tweets or the replies remained the same. The bewilderment was clarified during the quarterly earnings call of Twitter by Twitter’s CEO Jack Dorsey to the question “Is there less confusion for new users since you’ve expanded the character limit?“

Dorsey’s response validated our observation in that “…..And one of the things we’re watching for is to see if the average Tweet size would go up as a result, and it has not. People do have — they’re even more seeing less abandonment of Tweets, but we’re also seeing a lot more engagement…..”

In effect, the addition of room for Twitter users seems to have resulted in a lower abandonment of Tweets with the doubling of the character limit the degree of brevity has remained the same. Will that make Twitter a much more dependable social signal?  We will indeed extract and analyze the metrics again in the coming quarter to determine if this the case.