Are You Ready for Some Football (Brands)?

With the exception of tonight’s Giants / Vikings game on ESPN, week 4 of the NFL 2016-2017 season is in the books.  Though my team, the Panthers, is not having the same success as last year, the networks carrying the games are still doing well and charging premiums for commercials during NFL broadcasts.  As detailed in a recent AdAge article by Anthony Grupi, NFL games are cord-cutter Kryptonite – the ad rates are at an all-time high.  In fact, NBC’s “Sunday Night Football” was last year’s most valuable 30-second primetime spot.

The AdAge article also detailed the top NFL ad spenders from last season.  These brands clearly see the NFL audience as a great opportunity to build their brands.  And while ad success can be measured in lift in cars or burgers sold, here at AffinityAnswers we can track the affinity growth of the brands with the NFL during the season in which the ads ran.

The table below shows the largest NFL ad spenders (AdAge’s source is iSpot.tv).  Verizon was the top spender at $132 million with Fanduel in 9th at $70 million.  On the x-axis, we measure each brand’s TrueAffinity™ with the NFL.  TrueAffinity™ is a proprietary brand metric created by AffinityAnswers.  It measures the relative level and intensity of mutual affinity between two brands on an exponential scale from zero to ten.  As a rule of thumb, a TrueAffinity™ score of seven is usually considered a strong relationship.  Here we see all nine brands have a decent level of affinity with the NFL, though we do see some players performing better than others.  The logos represent their TrueAffinity™ at the start of the season; the arrows representt TrueAffinity™ at the end of the season. 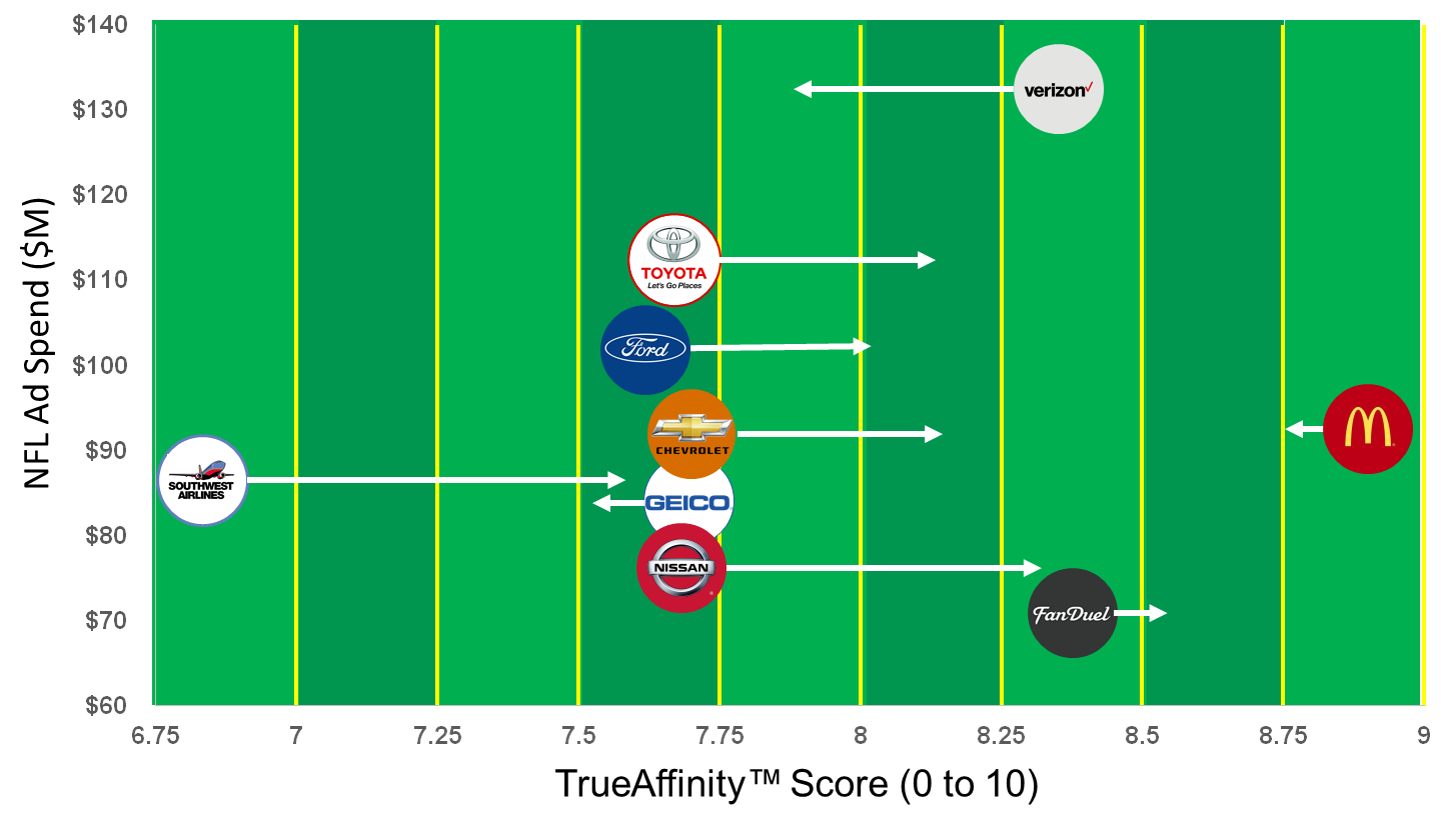 The first standout we see is McDonald’s, who’s TrueAffinity™ score was about 8.75 for the entire NFL season.  This is likely due to the brand’s higher transaction volume as well as local-market franchise campaigns ran with individual NFL teams.  Verizon and Fanduel have the next two highest affinities.  Fanduel makes logical sense.  Fans of a sports fantasy site have a high overlap with fans of professional football.  Verizon, interestingly, saw declines in TrueAffinity™ during the last NFL season.  This may be a signal that Verizon should reexamine their campaign, or try to further penetrate the NFL audience by running parallel, targeted programmatic campaigns (AffinityAnswers offers an NFL audience and individual team audiences via our activation partner, Oracle Data Cloud).  Since TrueAffinity™ is a relative metric, it may also mean that Verizon competitors are making a move into the NFL market.

In the center of the chart all the automotive brands are clustered above 7.5.  All four saw affinity growth with the NFL during the season, with Nissan getting the most bang for the buck.  Auto insurer Geico is also at this same general TrueAffinity™ level, but saw a slight decline as the season progressed.

And finally Southwest Airlines stands out as the biggest mover during the 2015-2016 season.  They started the season with a TrueAffinity™ score of 6.8, but ended at 7.6.  Their campaign clearly resonated with the NFL fan base.

These are just the top advertisers, and there is much more we can discover if we analyze the full marketing and advertising plans of these brands.  If you are interested in seeing more, you can discover more affinities to the NFL with our Affinity Explorer tool, or just drop me a note at stephen@affinityanswers.com.  To find and activate NFL audiences in your DSP, just search for AffinityAnswers branded data.  Or email and we will walk you through the process.